Peschaud and Cie International is a land, river, lake, lagoon and sea logistics company with over 40 years of successful experience in all kinds of extreme geographic environments.

Peschaud exclusively uses its own human and technical resources to perform the projects entrusted to it. It is experienced in implementing its work in record time and in full compliance with the Quality, Health, Safety and Environment standards rigorously developed and constantly improved over years of experience.

Peschaud has effective training and accreditation programmes that are effective enough to quickly employ more than 95% of its national workforce in the countries in which it operates, thus contributing to the growing demand that national interests be promoted as a matter of priority.

Peschaud has mastered the art of bringing together different modes of transport (mainly sea and land) to carry out ambitious turnkey projects, from design to completion.

Peschaud is made up of a young, close-knit and supportive team with proven experience in all kinds of operations. The decision-making process of our emergency units is particularly fluid and efficient when faced with the difficulties that are inevitably encountered.

During 40 years of complex logistics operations, Peschaud has always lived up to its commitments, and has the world’s largest companies among its references.

A WORD FROM THE CHAIRMAN

2018 marked our Group’s return to financial equilibrium. This was the result of significant efforts to reduce our costs, while preserving the essence of our great company.

2019 is the year of recovery in an economic situation with a brighter outlook, although it is still affected by turbulence. Our customers’ enthusiasm for barrels over $100 is something that can be forgotten: The crisis has had the effect of historically challenging methods and costs, and we have been forced to anticipate, participate and adapt in order to survive. This is how Peschaud expanded its range of skills: by building and operating a newly-designed river crewboat that combines both speed and fuel savings, and by winning a major offshore crewboat service contract in Cameroon.

In Gabon, the reshuffling of the cards among oil companies has resulted in the revival of fields known to be ageing and in new discoveries, particularly in the deep offshore area. New buyers are investing heavily in development campaigns that will enable the entire profession to finally reach a level of sustained activity.

Major projects are being reviewed, for example in Uganda, Mozambique and Senegal, all located in the Group’ s areas of expertise, which has anticipated their resurgence and actively participated in them.

So the time has come to resume activities, to undertake the difficult task of restoring our resources, to recruit and train, to adopt a rigorous quality policy and to implement a reasoned investment strategy in order to meet the new market requirements.

After an excessively long period of dead calm, we are getting ready for a flurry of activity that will require intelligence, energy, discipline and good sense from all on board. 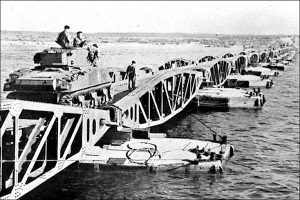 In August 1940, Philippe Peschaud (1915–2006) chose to join Free France from Cameroon to follow the formidable 2nd Armoured Division led by General Leclerc from Brazzaville to Berchtesgaden. As a young train officer, he actively participated in complex logistical operations that were crucial to the allies’ progress towards victory. Deeply grateful for the teachings received during this short but very intense period of his life, he never ceased to exude an encouraging spirit to this group of men and women in the private sector that he joined after the war and by assuming for more than thirty years the presidency of the Association and then of the Fondation Maréchal Leclerc de Hauteclocque.

His wife and closest associate throughout his life, Rosette Trinquet (1920– 2015), right in the photo, a farmer’s daughter from the Gharb Plain in Morocco, also joined the Second Armoured Division, undergoing training then in Rabat to be an ambulance driver in the Rochambeau Group composed exclusively of heroic women throughout the campaign for the liberation of France.

They founded Peschaud and Cie International in 1956 and developed a new “end-to-end transport” concept for industrial projects (desalination plants, thermal plants, refineries, pipelines, water conveyance) to new destinations such as Algeria, Libya or Saudi Arabia. The first bases equipped with logistical facilities were created (Bengazi, Hassi Messaoud, Jeddha, Balikpapan etc.) to ensure deliveries to their destinations when resources were lacking. 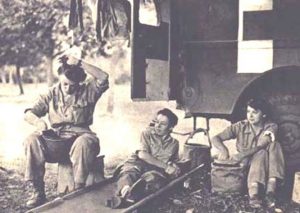 In 1976, their son Christophe joined the company, which he took over in 1985 after living abroad for several years. With his energy, the group has come to focus more specifically on the Petroleum Logistics line of business. Exhilarating experiences have abounded in all kinds of challenging terrain: the Abu Dhabi desert, the mountains of Yemen, the banks of the Irrawaddy River in Myanmar, the Tanzanian savannah, the coasts of Somalia, the marshes formed by the Nile in Sudan, the lagoons and rivers of Gabon, the equatorial forests of West Africa and the flood-prone areas of southern Chad.

In 2011, his son Georges joined the company and has held many positions abroad, becoming Deputy Managing Director of the Gabonese subsidiary in 2016.

This company, which perpetuates the bold culture created by Philippe and Rosette Peschaud, continues to tackle all kinds of increasingly complex logistical challenges, while fully respecting the rigorous operational constraints imposed by the oil industry.